The withdrawal of co-proxamol has been accompanied by a significant reduction in mortality from co-proxamol overdose in Scotland. Initial data suggests there is no evidence of an increase in mortality associated with other analgesics, such as paracetamol and co-codamol, despite a steady increase in their use.

Action
Although the MHRA removed co-proxamol’s UK marketing authorisation in December 2007, it recognised that there is small group of patients who are likely to find it very difficult to change from this drug or where alternatives appear not to be effective or suitable. Therefore it did not recommend a complete ban and co-proxamol is still available to prescribe under a ‘named patient basis’ with prescribers taking full clinical responsibility. Prescribing data in England shows that the number of co-proxamol items prescribed each month has fallen by 95%, from over 530,000 in January 2005 to 29,000 in June 2008. Nevertheless, as we have recommended in a previous blog, clinicians should ensure that audits have been undertaken to identify patients who are still taking co-proxamol. The pain control of all such patients should be reviewed fully and their prescriptions changed to more suitable and licensed alternatives wherever possible. Further information on appropriate pain control can be found on the pain management section of NPC. 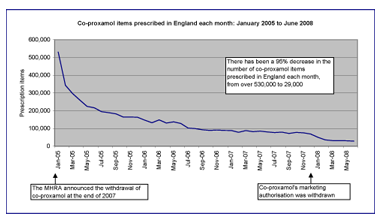 What is the background to this?
The MHRA announced in January 2005 that co-proxamol would be withdrawn at the end of 2007 following a phased withdrawal. This decision was reached after a safety review of the risks and benefits of co-proxamol concluded that the “efficacy of co-proxamol is poorly established and the risk of toxicity in overdose, both accidental and deliberate, is unacceptable”.

What does this study claim?
Deaths due to co-proxamol poisoning alone (with or without alcohol) were identified using data from the General Register Office in Scotland for the period 2000–2006. Following announcement of the withdrawal in 2005, a significant reduction in deaths due to co-proxamol overdose was seen in 2006, compared with the five years prior to the withdrawal (10 deaths in 2006 vs. mean 37 deaths/year in 2000–2004, P<0.0001). The total number of poisoning deaths also fell over this period (mean 129.5 deaths/year 2005–2006 vs. mean 171.2 deaths/year 2000–2004, P=0.005). However, as the total poisoning deaths started to fall before co-proxamol was withdrawn, is it unclear how much of the reduction is due to the withdrawal of co-proxamol alone.

The total number of prescription items for commonly used analgesics remained relatively constant from 2002–2006. Although there has been a steady increase in the number of prescriptions for other analgesics, suggesting that patients have switched from co-proxamol to drugs such as co-codamol or paracetamol, there does not appear to have been a compensatory rise in mortality due to these other drugs. However, a longer period of observation is necessary to confirm this.

So what?
The authors estimate that, if the epidemiology across England and Wales is similar to that in Scotland, around 300 lives will have been saved each year by the withdrawal of co-proxamol.

Intervention: Mortality data related to analgesic poisoning was obtained from the General Register Office Scotland to determine what effect the withdrawal of co-proxamol from the UK market has had on mortality from poisoning in Scotland from 2000–2006.

Feedback
Please comment on this blog in the NPC discussion rooms, or using our feedback form