A report from the NHS Information Centre assessed the variation in the use of 26 medicines positively approved by NICE in 13 technology appraisals. In 7 of the 12 appraisals where a comparison could be made, observed use was higher than expected by NICE. In 5 cases use was lower than predicted, but in 2 of these cases safety warnings, issued since the publication of the guidance, had resulted in drug withdrawal or restricted use.

Action
Although the information in this report is ‘experimental’ in status, it provides useful information for service providers who may wish to review their performance in implementing NICE guidance. Feedback on the report is encouraged.

What did the report find?
Of the 12 appraisals where a comparison could be made, observed use by the NHS in England was higher than the predicted use for seven and lower for five.

The appraisals where observed use exceeded the predicted use in 2008 were:

The appraisals where observed use is lower than predicted use in 2008 were:

For each of the technologies, the report provides a comparison of national (England) and SHA (where appropriate) predicted versus observed uptake of medicines expressed as defined daily doses (DDDs). It also provides information broken down by (anonymised) PCT on the number of DDDs per registered patient and the number of DDDs per expected patient. National trends in expenditure over time are also shown.

So what?
This is an experimental publication and is part of a planned annual series. Feedback is requested from users of how best to estimate uptake to allow meaningful interpretation of any variation across local NHS organisations in the future. In interpreting the data, it is important to note that predicted and observed use may differ for a variety of reasons and should not be assumed to definitely indicate either ‘under’ or ‘over’ prescribing. Nevertheless, the report contains further useful information which may help judge if NHS resources are being used in line with NICE recommendations, at a national, SHA or PCT level.

In most cases the medicines evaluated were being prescribed in excess of the expected level, and in some cases where drugs were prescribed at lower than expected levels, there were clear mitigating circumstances why this was the case. In two cases, safety warnings issued after publication of the NICE guidance had led to withdrawal or restricted use of the drug in question.

The report demonstrates considerable variation in prescribing practices, and by implication, success at implementing NICE guidance, across individual PCTs. It indicates that there are considerable opportunities for improvements in this respect.

One example of where there would appear to be a general failure to implement NICE guidance in full is in the prescribing of the Z-drugs (zaleplon, zolpidem and zopiclone) for insomnia. These continue to be prescribed in excess of the quantities that would be expected if used in accordance with NICE guidance – i.e. 28 DDDs. In Figure 1, taken from the report, it can be seen that observed use ranged from about 2 to 16 times (average 7.4) the expected use.

Figure 1. Prescribing of the Z-drugs (zaleplon, zolpidem and zopiclone) for insomnia: number of DDDs per expected patient by PCT in 2008. A line has been drawn to indicate the expected use level (28 DDD). 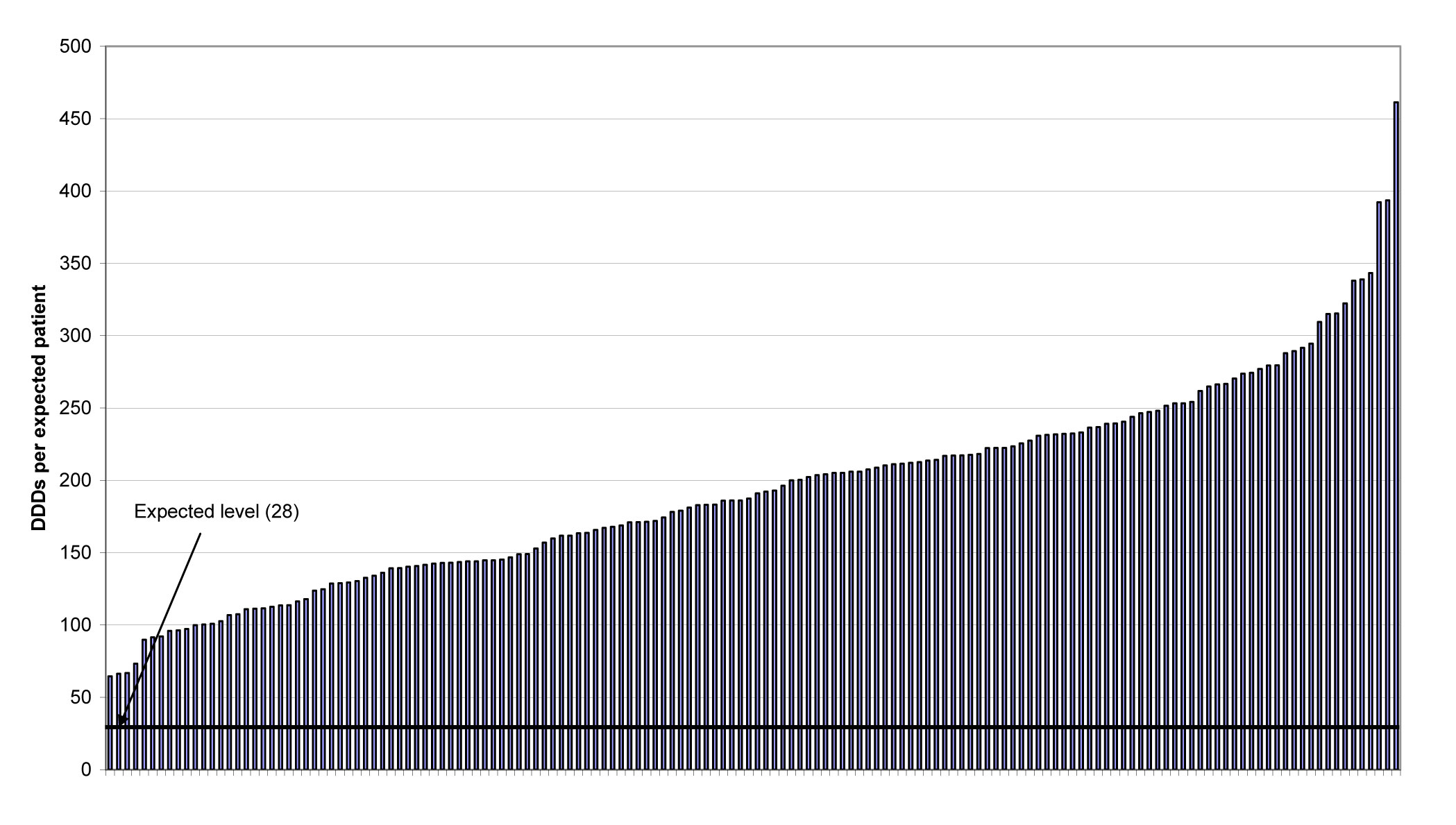 Please comment on this blog in the NPC discussion rooms, or using our feedback form.

Make sure you are signed up to NPC Email updates — the free email alerting system that keeps you up to date with the NPC news and outputs relevant to you.