The MHRA has issued a safety warning for the antihypertensive, aliskiren▼, in light of EMA advice. This follows the early termination of the ALTITUDE study which found no benefit but more cases of stroke, renal complications, hyperkalaemia and hypotension in patients who received aliskiren in combination with ACE inhibitors or angiotensin receptor blockers (ARBs) compared with those who received ACE inhibitors or ARBs alone. Aliskiren prescribing in general practice in England has increased steadily since its launch in 2007.

Action
Prescribers should follow the recommendations given in the NICE guideline on hypertension, which was updated in 2011 and outlines a stepwise approach to drug treatment. MeReC Rapid Review No. 4470 outlines the recommendations in the NICE guideline and includes an algorithm for drug treatment. Aliskiren was not included in the drugs recommended by NICE. Indeed, in the NICE full guideline, the guideline development group concluded that there was insufficient evidence of aliskiren’s effectiveness to determine its suitability for use in resistant hypertension.

Prescribing managers may wish to examine local prescribing patterns for aliskiren and ensure local practice is in line with NICE Guidance on hypertension.

In addition, since aliskiren is a black triangle▼ drug, UK healthcare professionals should report any suspected adverse reactions associated with it to the MHRA via the Yellow Card Scheme. Updated advice may be issued by the MHRA early in 2012 when additional analyses from the ALTITUDE study have been completed.

What is the background to this?
Aliskiren is a direct renin inhibitor approved for the treatment of essential hypertension. The ALTITUDE study was a placebo-controlled phase III trial that included 8,606 patients with type 2 diabetes and renal impairment and/or cardiovascular disease. Aliskiren 300mg daily was given in addition to an ACE inhibitor or ARB. The blood pressure of most patients was adequately controlled before they took part in the study. The study was stopped early because it found no benefit but more cases of stroke, renal complications, hyperkalaemia and hypotension in patients who received aliskiren compared with those who received placebo. The EMA’s Committee for Medicinal Products for Human Use has asked the manufacturer of aliskiren to provide additional analyses to allow them to assess the impact of the results of this study on the benefit-risk profile of aliskiren, in order to determine the need for regulatory action.

A systematic review and meta-analysis of 10 randomised controlled trials (n=4,814) has recently been published that also shows an increase in the risk of hyperkalaemia when aliskiren is used with ACE inhibitors or ARBs. It found no effect on kidney injury but It did not report the effects of treatment on the risk of stroke or hypotension.

It is important to note that prescribing and spending on aliskiren in general practice in England have increased steadily since its launch in 2007 (see Figure below). From October 2010 to September 2011 over 80,000 items were prescribed costing around £2.4 million [personal communication NHSBSA January 2012]. Therefore, in view of this safety warning and the fact that aliskiren is not included as a treatment option in the NICE hypertension guideline, it would seem sensible to review local prescribing patterns for aliskiren and, where appropriate, review prescribing practices in line with NICE guidance.

Figure. Prescribing of and spending on aliskiren in general practice in England 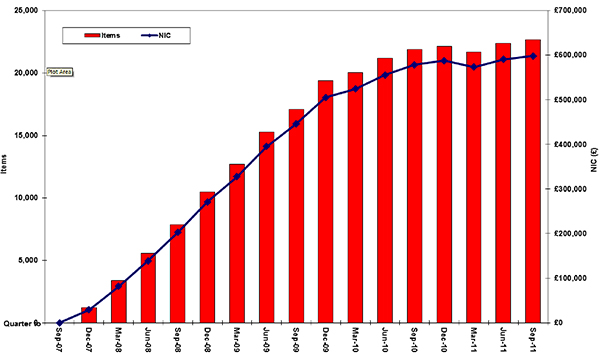 Further information on managing hypertension can be found on NHS Evidence and in MeReC Rapid Review No. 4470. The e-learning hypertension section on the NPC website is currently being updated to reflect the new NICE guideline. Hypertension is also featured in a NICE Pathway.

Please comment on this rapid review using our feedback form.

Make sure you are signed up to NPC Email updates — the free email alerting system that keeps you up to date with the NPC news and outputs relevant to you.