Two observational studies (UK study and US study) have found that there is a two to three-fold increased relative risk of venous thromboembolism (VTE) associated with the use of drospirenone-containing combined oral contraceptives (COCs), e.g. Yasmin, compared with levonorgestrel-containing COCs. In these studies, the incidence of VTE was about 20 to 30 cases per 100,000 women-years of use with drospirenone-containing COCs and about 10 cases per 100,000 women-years of use with levonorgestrel-containing COCs.

All COCs increase the risk of VTE but, in absolute terms, this risk is low and lower than that in pregnancy.

Level of evidence:
Level 2 (limited quality patient-oriented evidence) according to the SORT criteria.

Action
Healthcare professionals should review their prescribing of oral contraceptives to make sure it reflects current MHRA advice (see below) Rather than having an advantage in this regard, the VTE risk with drospirenone-containing COCs, such as Yasmin, may be higher than with levonorgestrel-containing COCs. While patient choice is an important factor in selecting a suitable contraceptive method, a levonorgestrel-containing COC is a sensible first choice for women who decide to use a COC, because of their well known safety profile.

Note: – this was the subject of a Drug Safety Update bulletin published by the MHRA in June 2011.

What is the background to this?
In the April 2010 issue of Drug Safety Update, the MHRA advised prescribers that the VTE risk associated with Yasmin may be slightly higher than previously estimated – lying somewhere between the risk associated with second-generation COCs containing levonorgestrel and third generation COCs containing desogestrel or gestodene. This advice was based on two observational studies published in the BMJ in 2009: Lidegaard, et al conducted in Denmark and van Hylckama Vileg, et al conducted in the Netherlands.

Two further observational studies looking at the VTE risk associated with drospirenone-containing COCs compared with levonorgestrel-containing COCs have recently been published in the BMJ. Parkin, et al (UK study) conducted a nested case-control study based on the UK General Practice Research Database, and Jick and Hernandez (US study) conducted a case-control and cohort study using US claims data. The results of these recent studies are reviewed here.

How does this relate to other studies?
The results from the two recent observational studies support the observational studies published in the BMJ in 2009: Lidegaard et al and van Hylckama Vileg A et al. These also found an increased relative risk of VTE associated with drospirenone-containing COCs compared with levonorgestrel-containing COCs of 1·64 (95% CI 1·27 to 2·10) and 1·7 (95% CI 0·7 to 3·9), respectively.

Two earlier industry-sponsored cohort studies (Dinger JC, et al and Seeger JD, et al) disagreed that Yasmin was associated with an increased risk of VTE, suggesting this risk was comparable with that for other COCs containing a similar level of oestrogen, including those containing levonorgestrel.

All these studies, including those recently published, have inherent limitations because they are observational. For example, in the UK study, the number of cases and controls were low, the case mix of deep vein thrombosis and pulmonary embolism did not reflect clinical practice, and data were missing on obesity, an important potential confounding factor. In the US study, data on obesity were incomplete, and the data on duration of exposure to contraceptives may not be reliable.

So what?
Yasmin was launched in 2002 as the first COC to contain the fourth generation progestogen, drospirenone, in addition to standard strength ethinylestradiol.

The Yasmin Summary of Product Characteristics states that, in a therapeutic dosage, drospirenone possesses antiandrogenic and mild antimineralocorticoid properties; and that there are indications from clinical studies that these result in mild antimineralocorticoid effects. This could in theory have advantages with regard to fluid retention, weight gain, skin condition or premenstrual symptoms. However, there is no conclusive evidence that Yasmin is clinically significantly superior to other COCs with regard to any of these non-contraceptive effects. The MeReC Bulletin from 2006 concluded that Yasmin is an option for those women suitable for a COC. However, current evidence indicates that on a population level Yasmin has no conclusive advantages over other standard strength COCs.

The studies reviewed here, add support to previous concerns about the VTE risk associated with Yasmin. All COCs increase the risk of VTE, but these studies found that the risk associated with drospirenone-containing COCs (20 to 30 cases per 100,000 women-years of use) is higher than that associated with levonorgestrel-containing COCs (about 10 cases per 100,000 women-years of use). These data are not conclusive and other studies have found no such increased risk. In absolute terms, the VTE risk with Yasmin is still very low and lower than that in pregnancy (about 60 per 100,000 pregnancies). However, Yasmin certainly provides no advantage over other, more well-established, COCs in this regard.

Yasmin is relatively expensive compared with other COCs, at £63.70 for one years supply, compared with £6.46 to £27.95 for other COCs (excluding Qlaira▼): from Regional Drug and Therapeutics Centre (Newcastle) Cost comparison charts April 2011).

As the graphs below show, the prescribing of Yasmin has increased steadily since launch. In the quarter to December 2010, approximately 17% of all standard strength COC prescription items dispensed were for Yasmin. This represented about 45% of the total cost of standard strength COCs – about £18m of the £40m annual spend in England. This amount of prescribing for Yasmin could be viewed as excessive if we are looking to maintain or improve quality and enhance value for money in the NHS.

As the editorial accompanying these recent studies suggests, it would seem sensible to choose a levonorgestrel-containing COC for women who decide that a COC is their contraceptive of choice, because of its well known safety profile, unless there is a persistent reason to use another type. The number of women with such a specific indication for drospirenone (as Yasmin) is likely to be small. 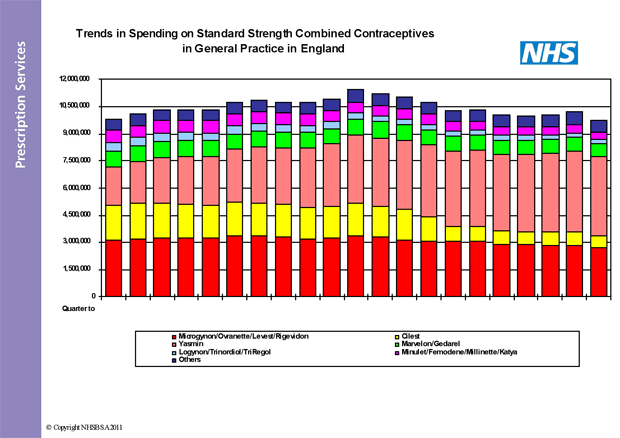 Patients, Intervention and comparison
318,825 women aged 15-44 years without major risk factors for VTE starting a new episode of use of a COC containing 30 micrograms oestrogen in combination with either drospirenone or levonorgestrel between May 2002 and September 2009. Cases were women with a first diagnosis of VTE; up to four controls, matched by age, duration of recorded information, and general practice, were randomly selected for each case.

Outcomes and results
61 cases of idiopathic VTE and 215 matched controls were identified. In the case-control analysis, current use of drospirenone associated with a threefold higher risk of non-fatal idiopathic VTE compared with levonorgestrel use; odds ratio adjusted for body mass index 3.3 (95%CI 1.4 to 7.6). Subanalyses suggested that referral, diagnostic, first time user, duration of use, and switching biases were unlikely explanations for this finding. The cohort had an estimated 73,853 women-years of use of drospirenone-containing COCs and 482,229 women-years of use of levonorgestrel-containing COCs. Crude incidence rate was 23.0 (95%CI 13.4 to 36.9) per 100,000 woman-years in current users of drospirenone and 9.1 (95%CI 6.6 to 12.2) per 100,000 woman-years in current users of levonorgestrel. Age adjusted incidence rate ratio was 2.7 (95%CI 1.5 to 4.7).

Patients, Intervention and comparison
937,408 women aged 15 to 44 years who received a COC containing either drospirenone or levonorgestrel after 1 January 2002. Cases were women with current use of a study COC and a diagnosis of VTE in the absence of identifiable clinical risk factors (idiopathic venous thromboembolism). Up to four controls were matched to each case by age and calendar time.

Please comment on this rapid review in the NPC discussion rooms, or using our feedback form.